School lchildren in Hounslow will have to wait to find out if they have won back the rugby record for the world's largest scrum.

Hoping to seal their fate with a place in the Guinness Book of Records, a total of 1,198 people from across the borough were involved in the world record attempt organised by Sport Impact at Cranford Community College.

Children from 44 primary schools; two special schools; Cranford Community College; and special guests, including players from Harlequins RFC, made the attempt at the tag-rugby festival inspired by the Rugby World Cup 2015.

Mayor of Hounslow, Nisar Malik, also attended and put the ball into the scrum.

The event was filmed and sent off to Guinness World Record officials with a response expected in a few weeks.

Councillor Steve Curran, leader of Hounslow Council said: “Organising a competition on this scale was quite a feat and winning back the world record for Hounslow would be the icing on the cake."

“It would be fantastic if England can beat Australia at something, even if the professional team wasn’t able to do so at Twickenham.

“The aim of the festival was to involve as many children as possible in the excitement of the Rugby World Cup, which is being played out on their doorsteps."

“We have set ourselves the ambitious target of becoming the most active in London by 2022 and it’s events like this that we hope will inspire many of these children to make the right life choices. Congratulations to the winners and every child that took part.”

If successful, it means Australia would have held on to the record for less than a month with 1,160 people taking part.

Prior to that, Blackrock College in Dublin managed the feat in May 2015 with 1,044 students taking part, snatching the world record from the Rugby Football Union, who set the bar at 1,008 participants at Twickenham a year ago.

This will be the third World Record that Sport Impact has earned with young people in Hounslow; after 675 children set the record for the largest number of players bouncing balls on their rackets in 2013; and last summer 770 players took part in the biggest even tennis lesson.

Alan Watkinson, partnership director for Sport Impact, added: “Congratulations to all involved in the Guinness World Record attempt and the festival and many thanks to the local authority and Cranford Community College for being key partners in the delivery of this event.”

The event was sponsored by Hounslow Council together with Davis Sports and other local organisations. 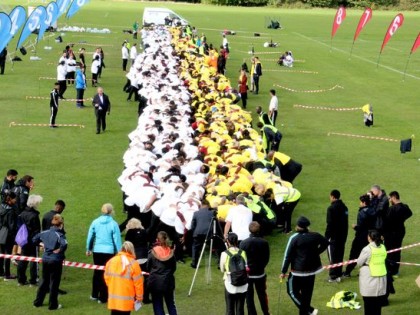