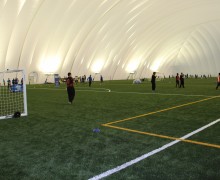 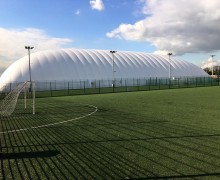 QPR bosses visited the giant Cranford SuperDome which is to be used for training by its academy players.

The visit to see the huge covered football pitch at Cranford Community College was made by QPR's chairman Tony Fernandez, director of football and ex-footballer Les Ferdinand, CEO Lee Hoos, on Thursday (October 15).

Mr Fernandez who was impressed by the facility, said: "I am delighted with our investment in the Cranford SuperDome which will bring benefits to QPR Academy, Cranford Community College and the local community."

Kevin Prunty, Executive Headteacher at Cranford Community College, added: "It is fitting that Tony should visit us as I have just found out that the Cranford SuperDome has become a landmark for people flying into Heathrow airport.”

"Apparently it is over 20 years since Tony last visited Cranford Community College to play rugby but we are sure that the lure of the Cranford SuperDome will ensure Tony becomes a regular visitor.”